Today sees the launch of the national counter terrorism awareness campaign ‘Make Nothing Happen’, focusing on the critical role the public can play in defeating terrorism. This is the first campaign under the new branding platform, ACT: Action Counters Terrorism: a powerful new tool to bring all counter terrorism campaigns under one banner. It urges the public to act on their instincts and report suspicious activity to the police to help keep communities safe.

Mark Rowley, Assistant Commissioner of the Metropolitan Police said: “While police, together with our security partners, have been working tirelessly to identify and disrupt the terrorist threat, we are raising more awareness about how communities can defeat terrorism by being more open about the risks, while equipping them with the advice and tools they need. This is why we have developed ACT.”

The key objectives for the campaign are: 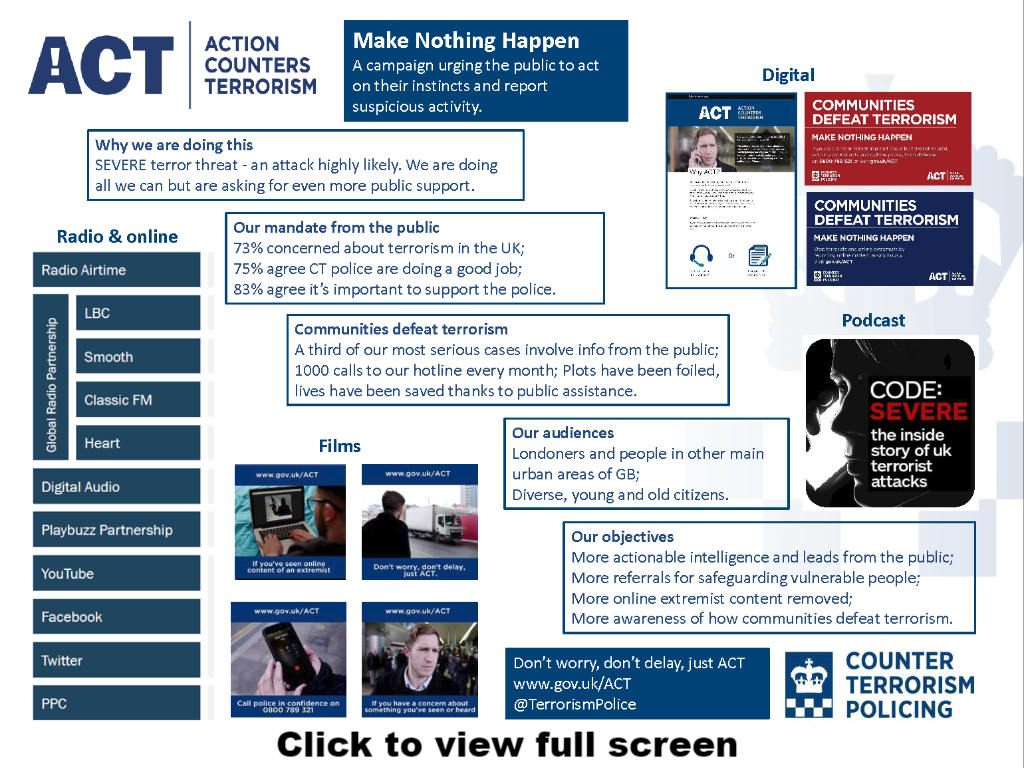 The ACT website contains advice, campaign materials and links to supportive information and online reporting tools. Also, don’t forget to follow @TerrorismPolice on Twitter and the #ActionCountersTerrorism hashtag for the latest updates.

We use cookies on our website to give you the most relevant experience by remembering your preferences and repeat visits. By clicking “Accept All”, you consent to the use of ALL the cookies. However, you may visit "Cookie Settings" to provide a controlled consent.
Cookie SettingsAccept All
Manage consent

This website uses cookies to improve your experience while you navigate through the website. Out of these, the cookies that are categorized as necessary are stored on your browser as they are essential for the working of basic functionalities of the website. We also use third-party cookies that help us analyze and understand how you use this website. These cookies will be stored in your browser only with your consent. You also have the option to opt-out of these cookies. But opting out of some of these cookies may affect your browsing experience.
Necessary Always Enabled
Necessary cookies are absolutely essential for the website to function properly. These cookies ensure basic functionalities and security features of the website, anonymously.
Functional
Functional cookies help to perform certain functionalities like sharing the content of the website on social media platforms, collect feedbacks, and other third-party features.
Performance
Performance cookies are used to understand and analyze the key performance indexes of the website which helps in delivering a better user experience for the visitors.
Analytics
Analytical cookies are used to understand how visitors interact with the website. These cookies help provide information on metrics the number of visitors, bounce rate, traffic source, etc.
Advertisement
Advertisement cookies are used to provide visitors with relevant ads and marketing campaigns. These cookies track visitors across websites and collect information to provide customized ads.
Others
Other uncategorized cookies are those that are being analyzed and have not been classified into a category as yet.
SAVE & ACCEPT
Powered by